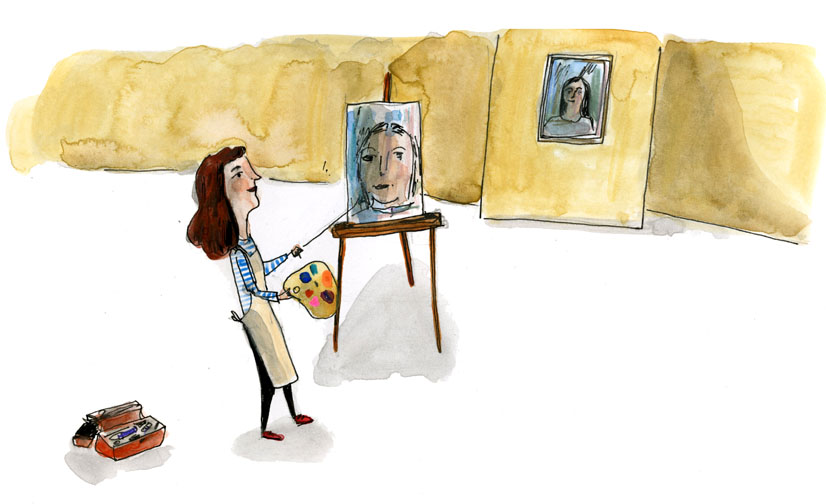 Imagine you’re an artist. One day, you find out that another artist had gained acclaim for a painting that looks exactly like one you created many years ago. Then, you learn that that painting sold at auction for nearly six million dollars. How would you react?

For one man, the scenario wasn’t hypothetical. It was bizarrely, painfully real. Simon Parkin of The New Yorker recently told the story of prolific sci-fi illustrator Chris Foss, who watched as British artist Glenn Brown’s “Ornamental Despair,” a work of art clearly derivative of one of Foss’s pieces, fetched $5.7 million in London.

The painting is almost an exact replica of a science-fiction illustration that Foss created for a men’s magazine in the nineteen-seventies, for which he was paid about three hundred and fifty pounds. Brown’s painting was based on a reprint of Foss’s original, featured in a 1990 book collection of the artist’s work. “I knew he copied it from the book because the painting was cropped to fit the page. His version is clearly based on the cropped version,” Foss said.

How did that happen? First, it helps to know that Brown is known for this kind of thing. As Parkin put it: Brown “is a controversial figure in the art world, well known for reinterpretations of other artists’ works that are strikingly close to the originals.”

In the early 1990s, Brown actually—and reportedly, in a sneaky fashion—asked Foss for permission to paint a new version of the illustration. At the time, Foss was working for movie director Stanley Kubrick. “I was commuting up to [Kubrick’s] house every day when my assistant received a letter from Brown,” Foss told Parkin. “He put himself over as a young student who loved my work, and who wanted to create an homage. I scribbled a reply that simply read, ‘Go for it.'”

And the rest, to Foss’s chagrin, is history. Foss, Parkin reported, was only paid about 350 pounds for his initial painting. He didn’t get a cut of the $5.7 million. “What I can’t understand is,” he told Parkin, “who would pay six million dollars for a copy when they can buy the original for a fraction of the price?”

The art market can be completely ludicrous, with the reputation and personality of certain artists causing prices to skyrocket. As a result, lesser known artists like Foss sometimes find themselves getting the short end of the stick. If there’s any consolation, it’s that Foss remains as prolific and passionate as ever—even if his work isn’t making him filthy rich.